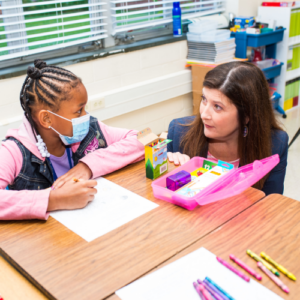 When searching for its next superintendent, Guilford County Schools (GCS) did not need to look far for its new leader. Dr. Whitney Oakley, who earned her doctoral degree in educational leadership from UNC Greensboro’s School of Education in 2011 and was serving as the district’s interim superintendent, was recently selected to guide North Carolina’s third-largest public school district.

Oakley’s path to UNCG seemed destined from the start. She said, “The UNCG roots run deep in my family. My parents met here, my kids both went to preschool here. I’ve been coming to UNCG my whole entire existence. And so, I always knew that if I were in a place to pursue my doctorate, that I would do it at home.”

The program’s support and ability to fit her busy schedule were also key reasons she chose UNCG. “There’s been such strong support. And it fit my schedule. I had kids, the district office is less than three miles from here, it’s between my home and my work. And just the credibility of the program, but also, the successes that were also a part of the program,” said Oakley.

Oakley is the first person to serve as the district’s superintendent who also grew up attending those very same schools. That experience gives her a unique perspective on the district and its needs.

Said Oakley, “There are no limits to what we can be and what our kids can be. I just hope that me being a product of Guilford County Schools shows our kids that. We have great schools, we have a really strong community. I think our community continues to show up for us, whether it’s after a tornado or in COVID, or as we return to schools, voting for school bonds. I just think that there’s hope, and promise, and opportunity and that we’re at this pivotal moment as a community, and so it’s personal. You know, I want all Guilford County schools to be the best place for students to learn, for teachers and staff to work, and for our community to grow as a whole during this time.”

Her path to this position did not start with her first job after college, but years before as a kindergarten student. Oakley said, “I knew from my first day of school that I wanted to be a teacher. I just think that the power of public education is something that’s always been a passion of mine. Just the feeling that I had as an almost five-year-old entering a kindergarten class. I knew from that moment that I wanted to be a teacher. And I still consider myself a teacher in this role. Just the feeling of being in a classroom and having a teacher that I could trust taught me how to do things I didn’t know how to do before.”

While pursuing her bachelor’s degree in special education, Oakley entered the classroom as a student teacher, working in a kindergarten through fifth grade special education class in Eastern North Carolina. With many students the children of military members enrolled, Oakley recalls the school being locked down in response to the 9/11 terrorist attacks. “We were locked down for two days, meaning we didn’t leave,” she said. “That also speaks to the role of a teacher and what you learn about students and relationships in times of crisis and tragedy. And of course, all of their parents were fine, but they were locked down on the base.”

She returned to Greensboro for a job at Frazier Elementary where she taught first grade before taking a job in Alamance County as a special education teacher. Her move into administration came during her time in Alamance County. “One day, the principal came into my classroom. It was like 6:30 at night. I remember putting things on the shelf, and he said, ‘Have you ever thought about being an assistant principal?’ And I said, ‘No, I haven’t.’ I was very happy in my third grade classroom. It was the year where the classroom was perfect. I finally had figured out where things went, and classroom management was solid. And so I became the assistant principal at that same school and served in that role for two and a half years and then went to become a principal at a very small, rural, poor, elementary school in Snow Camp.”

With the help of her staff, it was here that Oakley made the connection between health care and student performance and attendance. In this rural area with no local health care, whole families of students would miss school if one member was sick and needed to visit a doctor because they would not be able to be back in time to pick the other children up at the end of the school day.

After doing some research, she found that the average response time for ambulance services in the area was 17 minutes. The response was to write a grant that allowed for the opening of a school-based, community health center in the mobile unit behind the school. Students and staff could visit the health center during the day and it was open to the community at nights and on weekends. In part due to this action, proficiency was up by more than 10 points the following year.

A move to Burlington’s Eastlawn Elementary followed, where again a focus on health care links was important. She also focused on wraparound services, saying, “I remember going to some of the public housing that surrounded that school and just handing out alarm clocks to the kids and teaching them how to use them. And then they came to school, and they wanted to be at school. We were able to improve test scores and get off that low-performing list.”

That was the year that Oakley completed her doctorate at UNCG and had her first child. It was then that she decided to return to Guilford County and end her daily commute to Alamance County. She said, “I thought I should think about coming back to Guilford County Schools. It’s where I started, it’s where I went to school, it’s where I came from. And with a young child and a new family, it just seemed like time to take that commute off.”

By October of 2012, Oakley had started a position as executive director of elementary curriculum. Her role continued to grow as she moved up the ladder to assistant superintendent for teaching and learning and professional development, then chief academic officer, and then deputy superintendent, and, now, superintendent where she takes over a district that recently held groundbreaking ceremonies for six new schools.

Making the move to superintendent came at the perfect time for Oakley, who has her own children in Guilford County Schools. She said, “I think we just have this momentum right now. I think this next decade is a really consequential one for public education. There are a few places where we’ve made some academic gains, but we have a long way to go. But I think my vantage point is unique because I don’t need to learn the community. I know where we’ve been, I know where we are, and I know where we need to head together. I think the mental health needs of our staff and students is critically important and a priority for me. School safety is a priority for me. So I think living somewhere, and working somewhere, and sending my kids somewhere where we have a whole community that showed up to say public education and the state of our schools matters to us is personal and emotional. And it makes me want to stay here. Being able to see that through, I think is really important. I’ve been in the work since the beginning. I don’t want to give up any of what we’ve accomplished or our commitment to the master plan that our commissioners did alongside the Board of Education in 2019.”

Oakley’s experiences at UNCG have helped shape who she has become as an administrator. She said, “I would say that the equity focus was fully developed here. When I came to the table and I said, ‘I’m going to interview successful female principals that are under 40 for my dissertation,’ and was pushed – whose story are you not telling? Who doesn’t get to have those opportunities? And how are those effective principals supporting all student groups? So I got to a place where I was able to talk about implicit bias and racial equity in a very public way as a young, White leader. And that has been a benefit personally and professionally. But also just ethically. When you think about the fact that our district is 70% students of color; and representation does matter. And we shouldn’t have conversations about data or achievement where we’re not in a place where we can also talk about race as a predictor of outcomes. I got comfortable doing that in the old School of Education Building across the street. That’s invaluable because many people with the privilege that I brought to that table still can’t do that.”

UNCG and Guilford County Schools have recently developed partnerships, including a tutoring program that was recognized by the Biden Administration. Those partnerships are critical to both the school system and the university and Oakley would like to see those continue and grow.

She said, “There are so many people that work in Guilford County Schools that have worked with UNCG. And there are so many people that work at UNCG that have connections to Guilford County Schools. It’s a very strong connection. I think in terms of the partnerships, so far, the biggest one has been the tutoring. And then we have the math teachers of tomorrow. So we’ve got some very specific teacher pipeline efforts that are happening. I want to grow (the tutoring program) until every student that needs a tutor has a tutor. There are people that want the same thing. At this point in time, there’s enough momentum and a strong enough relationship, that we should only be able to do more, and get better, and reach more kids. There’s lots of hope, and commitment, and momentum to expand what’s already there.”

As she looks to the future educators, Oakley wants to keep those students studying at UNCG in the local schools. She points to the community commitment to education along with the economic development and growth in the area as reasons for them to remain here.

Oakley says, “I really think people need to know that it’s a great place to live and to work. And I think as educators, and Guilford County Schools, we are very intentional about opportunities for career growth and development and career pathways.”