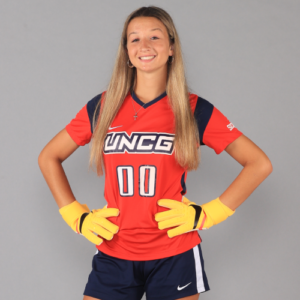 A preseason injury did not derail freshman elementary education major Emma Malone from having a successful inaugural collegiate season on the soccer field. The Connecticut native took over as the starting goalie for the UNC Greensboro women’s soccer team midway through the season, helping the team reach the conference finals and earning Southern Conference All-Freshman Team accolades.

Malone made her way to UNCG because of soccer, but the reputation of the School of Education helped to seal her decision to become a Spartan.

“So first, I was looking at (UNCG) for soccer,” said Malone. “That was my main goal for schools when I was looking. I immediately clicked with the team when I came down to visit. I immediately clicked with the coaches. The environment within the team was great. At that time I knew I wanted to be an education major. So when I was reading into the program here, I was like, ‘Well, this is perfect. Soccer is perfect. What’s holding me back from coming here?’”

Despite the fact that Malone’s mother wanted her to stay within five hours of their Connecticut home, she fell in love with UNCG and came to campus a few weeks ahead of most of the incoming freshman class for soccer preseason camp in August. She came in with the mindset that she was going to compete for the starting goalie spot.

She said, “I think for any freshman coming in, their goal is to play to the best of their ability every practice, every game, and want to earn a starting spot. I was like, if I can’t start, I want to play some. And then it is great that a coach noticed something and they gave me a chance and I got the starting position at the end.”

But that did not happen without an early challenge. Malone said, “I definitely got off to a rough start because I dislocated my pinkie in preseason, so that was a bit of a setback.”

Malone would go on to appear in 11 games, starting the final seven games of the season. She allowed 10 goals and made 28 saves on the year and the team posted a 5-0-2 record in her starts.

Earning all-freshman honors came as a surprise, but also as a confidence-builder for Malone. “It was crazy when I heard about it,” she said. “It’s such an honor to have…just to know that your hard work is paying off in some sort of way. So it definitely helped with the confidence going into the tournament.”

As a first-year student, Malone has had to adjust to the collegiate environment while also tackling the demands of a student-athlete. Between classes, homework, practices, weight training, and finding time to socialize with friends, it can be tough to find a balance. Following a few weeks of trying to establish a routine, Malone was able to figure out what worked best for her.

She said, “A couple of weeks were a bit rocky trying to figure out my time management, but then I got used to the schedule. I got into a rhythm where I was finishing my homework before Fridays, and then Friday, Saturday, and Sunday, I could focus on soccer.”

She sees a comparison to the skills she utilizes as a goalie on the soccer field to the skills she will need in a classroom. “I think sports have great characteristics that you can build in any career path. I think definitely leadership, especially as a goalie you’re supposed to be leading from the back, communicating from the back. I can take my leadership, communication, and personability, because you have to have a relationship with everybody, into the education field. I think the energy, too. Being a teacher, you want to be energized, especially with little kids.”

Working with children is something that Malone has wanted to do for a long time and feels like she connects well with students. While there are other options for working with children, Malone finds a calling to the classroom. “I’ve thought about it over and over again, and I can’t see myself doing another job,” she said. “I can’t see myself just sitting at a desk and working on a computer all day. That’s just not who I am. I need to be active and doing something with people who feel the same. I can only see myself being in that world.”