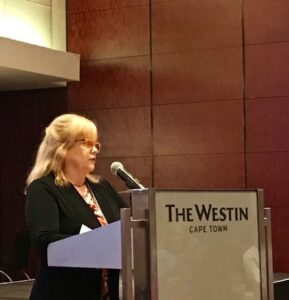 Dr. Mansfield presented, “Reimagining Community-Engaged Research: From Critical Policy Analysis to Political Action” which was co-authored with Dr. Anjalé Welton, University of Illinois. Their paper illustrates the utility of critical policy analysis (CPA) to critique the policy process and conduct community-engaged research. As Dr. Mansfield explained, “CPA scrutinizes the differences between policy rhetoric and reality and captures how those historically marginalized in the policy process might reclaim their voice through activism. While CPA scholars have contributed much to our understanding of the positive and negative potential of power, they often examine policies from a distance. Community members are seldom consulted despite their position as experts on their own lives and the effects of education policies. We argue that CPA can be used as a form of political advocacy, a way for education scholars work alongside students, parents, and other community members to engage in the political process and work toward more just policies and practices.”

To sharpen their understanding of the contextual and intersectional complexities of CPA and community engagement, Dr. Mansfield and Dr. Welton are currently expanding their study beyond their present sample of North American, British, and Australian scholars to those who represent other countries and continents.

Dr. Mansfield expressed her appreciation for Dr. Penelope “Nell” Pynes, Associate Provost for International Programs and the International Funds Committee for their support: “I am so thankful to have received an International Travel Fund (ITF) award to support my participation in WERA. This was a ‘once-in-a-lifetime opportunity to not only learn with and from a diverse array of scholars, but also to represent UNCG as one of the ‘diplomats’ of the AERA-WERA network. This impactful opportunity to promote the use and application of education research to a global audience could not have happened without the generous support of the ITF committee, the School of Education’s Dean’s Office and ELC Department.”