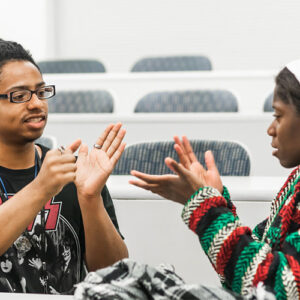 The Academy Awards are coming in a few days, and one 2021 film up for multiple awards has a special significance for many UNC Greensboro students and faculty members across two different programs in the School of Education and in the College of Arts and Sciences.

The film is “CODA,” an acronym for “child of a Deaf adult,” meaning a person who was raised by one or several deaf family members. The film – already honored with the Screen Actor’s Guild top honor, Golden Globe nominations, and an NAACP Image Award for Outstanding Independent Motion Picture – isn’t just unique in that it tells this type of life story, but in that many of the actors are Deaf rather than hearing people playing deaf people.

Many UNCG students, faculty, and alumni who most closely relate to the film are likely from the Professions in Deafness program – soon to be known as Interpreters, Deaf Education, and Advocacy in fall 2022. In the School of Education program, students choose from the three tracks and are fully prepared to serve the Deaf community in those areas when they graduate, including qualifying for interpreting licensure.

But that’s not the only area of campus that has a focus on American Sign Language. In the Department of Languages, Literatures, and Cultures, several hundred students are also enrolled in ASL classes, many of them earning a minor as well as satisfying their language requirements. While their professions may not be specifically in serving the Deaf community, their knowledge and practice of the language makes them more prepared to approach the world with inclusivity front-of-mind and to interact with Deaf people.