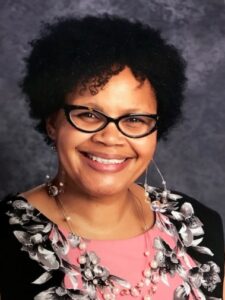 In her 20 years of serving as an educator, Chestnut has taught math and science on the middle and high school levels in Guilford and Rockingham counties. She was an assistant principal at Dalton L. McMichael High School, and served as principal at John W. Dillard Elementary School, Moss Street Elementary School and most recently, Bessemer Elementary School. Chestnut is a native of Reidsville. She completed her undergraduate studies at UNC Greensboro, and both her Master’s of School Administration and Education Specialist degrees at Appalachian State University.

“We are thrilled to have a leader for the Moss Street Partnership School who brings so much local insight, experience and expertise to these students and their families,” said UNC Greensboro Chancellor Franklin D. Gilliam, Jr. “Catina has proven herself in the classroom, as an administrator and in the community, and I am confident she is the right person for this vital job.”

The Moss Street Partnership School concept began in 2017 with a law passed by the North Carolina General Assembly. The law, which was modified earlier this year, requires nine UNC system universities with teacher education programs to open laboratory schools in low-performing areas. The UNC system office selected UNC Greensboro to run one of the schools and UNC Greensboro officials and Dr. Rodney Shotwell began discussions around the project. Recently, the school has received all relevant approvals and is set to begin operations this coming school year.

The Moss Street Partnership School will have about 420 students, approximately the same number currently at Moss Street Elementary, with 22 classrooms in kindergarten through fifth grade.

The school will feature innovative approaches to hands-on teaching and learning, a focus on developing student skills and interests in the highly desired “STEAM” subjects – science, technology, engineering, visual and performing arts and math – as well as providing other services including counseling, social work and additional support for students and families.